PLEASE NOTE WE ARE ONLY ACCEPTING ONLINE BOOKINGS AT PRESENT

Final farewell to Amphitrite, Doris and the 2018/19 Seal Season at Exploris Aquarium

On Sunday 14th July the public and the Exploris Aquarium seal rescue team will gather at Knockinelder beach, Co.Down to say farewell to grey seals Amphitrite and Doris. They have been at Exploris Aquarium’s seal sanctuary for 10 months and are now well enough to be released back to their natural home.

Both seals where rescued from Ballywalter last October, about 2 weeks apart. They both arrived at the seal sanctuary after being discovered by the public – abandoned, injured and in need of help by our specialist team.

After an initial assessment each seal began their journey to rehabilitation receiving extensive medical care, to ensure infections were kept at bay and housed in hospital pen whilst learning how to eat fish. Once they reached about 15kg and could self-feed they were moved to the outdoor pools where they learnt how to socialise with other seals. At this stage, all human contact was kept to a minimum to ensure a successful re-introduction to the sea.

Both seals are now ready to be discharged from the seal unit as they have successfully reached their target weight of over 30kg and are in good health, ready to take on adult life in the wild.

Peter William, Curator at Exploris Aquarium said “Both of these seals had a difficult start to life but after a long and difficult journey, we are pleased to be finally saying farewell and good luck to Amphitrite and Doris.  All being well the release of these two will conclude our rehabilitation season for 2018/19.”

He continued “Every year Exploris Aquarium rescues and releases between 20 to 40 seals. We rely on members of the public to call through to our seal rescue line when a pup is found on a beach.  Our team of trained staff will take as much detail as possible regarding location and seal condition and if necessary take action to lift the seal off the beach and bring to the centre.  At the centre our staff can treat the pups for injury or illness and provide 24 hour care. Only when the seals are fit and healthy again do we release them back to the wild. “

Ahead of the release all seals are tagged on their rear flipper to help identify them. Over time this will be used to see how rehabbed seals influence the wild population through breeding.

To date Exploris Aquarium has rescued and released over 600 common and grey seals back into the wild. This wouldn’t be possible without the funding support from DAERA, the vigilant public and our adopt a seal programme. This adoption programme allows the adopter to follow their seals journey through rehab for a small fee. The adoption helps fund the fresh fish they eat, medication to make them better and equipment to transport and keep them safe.

As this release concludes the 2018/19 seal season the 2019/20 begins and on the 22nd of June the seal sanctuary at Exploris Aquarium accepted their 1st Common Seal pup of the year, Ariel. Each season the seal rescue team decide on a naming theme for the rescued seal pups. For the 2019/20 season the naming theme is Disney. You can follow the progress of our new seal season on Facebook, Twitter and Instagram @explorisni 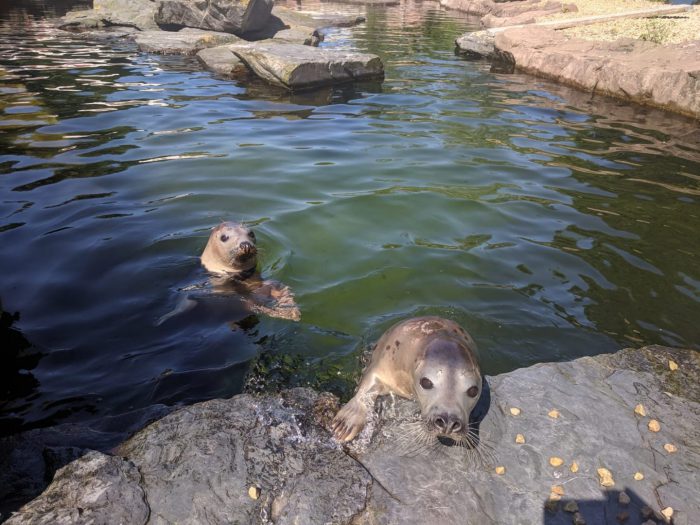