At Exploris we are the home to a waddle of Humboldt penguins.

Their name, Humboldt penguin, comes from a German explorer called Alexander von Humboldt. They are one of eighteen known species and would be average sized compared to some of the other species.

Research suggests that there are approximately 24,000 Humboldt penguins left in the wild, maybe fewer. Elements such as overfishing, destruction of habitat, invasive predators, caught by fishing boats and more have had an impact on their ability to thrive in the wild. As such, Humboldt Penguins are vulnerable to extinction. So we are very fortunate to keep them here at Exploris.

Our penguins have resided at Exploris since March 2021 after making their journey from Curraghs Wildlife Park in the Isle of Man.

Humboldt penguins are native to South America, living along the coasts of Chile and Peru where they have a nickname, ‘pajaro-niño’ which means baby bird. The climate there is quite like here, so these guys are very comfortable just living at Exploris’ Penguin Island.

Here at Exploris we feed our penguins around five kilos of sprat every day (between them all, not each!). This also changes on a seasonal basis as penguins usually eat a lot less food around their annual moulting period at the end of Summer.

If we’re completely honest, the penguins are one of the dirtiest animals in the aquarium. Their pool gets brushed twice a day and deep cleaned every month, but it gets grubby again very quickly. They like to keep our animal team busy!!

Whilst visiting, you’ll notice they all wear little coloured armbands. That’s just so that we can tell them apart as they all have their own names and personalities. They’re named after Greek gods and goddesses, examples of this are Artemis, Hera, Athena, Demeter, Apollo, Bacchus, etc.

Getting To Know Our Family

Poseidon is the penguin who loves to spend the most time in the water.

Ares is the most outgoing penguin; he loves a good challenge!

Zeus is the leader of the waddle, managing to reach parts of the enclosure that none of the rest can!

Hades tends to hang out on his own and was the last one to leave his crate when they arrived.

Some fun facts include: 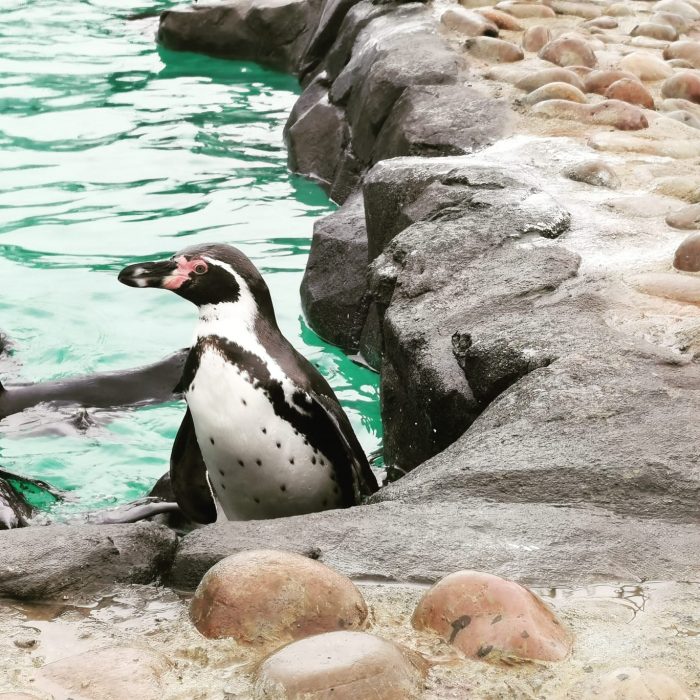